What is Nadi Astrology?

What is Nadi Astrology?

"DID A SEER FROM INDIA RECORD YOUR PAST, PRESENT
AND FUTURE LIVES MANY CENTURIES AGO?"
- YES…indeed..!!!

Ancient Seers and Sages have envi’saged’ rather foreseen what is in store for the SEEKER by furnishing the characteristic details about the past, present and FUTURE lives.

Nadi Astrology is a divine science and is an ancient tested methodology of finding one’s life predictions written in the palm leaves. In other words it’s a spiritual technique of identifying rather defining the destiny of one self.

Nadi Astrology is known as Nadi Jyothishyam and NADI according to tamil terminology is “to seek” or “in search of”. Can you believe that someone in India is documenting records of your entire past, present and future lives????...may sound unbelievable???... but Yes, through Naadi Astrology. Nadi is an ancient astrology, which has been composed by great Maharishis (Sages) of India in the ancient times using their spiritual and super natural powers. The sages documented these predictions for individuals for the betterment of humanity and to safeguard dharma (righteousness). 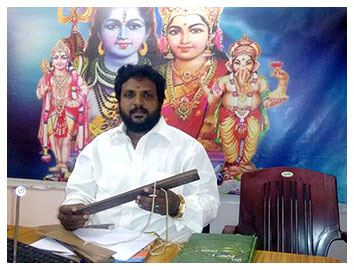 These sages predicted the characteristics, family history as well as the careers of innumerable individuals containing several thousand volumes of predictions. These Naadi predictions, being the repository of wisdom of the Great Saints was one of the well preserved books for thousands of years by many generations of rulers. Due to the benefaction of the Chola Kingdom, these Nadi Granthas were translated, protected and preserved at the Libraries of Tanjore and Vaideeswaran Koil.

The (g) olden age Rishis (Sages), who dictated those Naadi's scripts, were gifted with such a remarkable foresight that they accurately foretold the entire future of all mankind. Still many scholars in different parts of India and across have in their safekeeping several Granthas.

These Nadi Astrology predictions were initially thought rather considered to be just a writing on Astrology, but soon it became evident that these scriptures contained some unique predictions of specific natives, who come seeking them at a particular stage of their lifetime, as foreseen and foretold by the Great Sages.